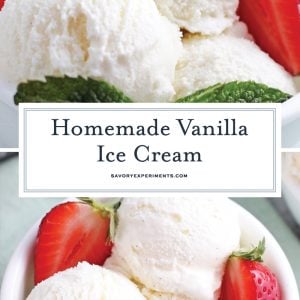 What better way to beat the heat on a hot summer day than with a scoop or two of cold ice cream? This homemade Vanilla Ice Cream recipe is creamy, sweet, and can be jazzed up with your favorite toppings or serve as the base for ripples of flavor or add-ins.

I purchased an ice cream machine last year and had great fun making flavors like Salted Caramel and Butter Ice Cream, but never came back to explore the classic popular ice cream flavors like vanilla bean.

What is the difference between vanilla ice cream and vanilla bean ice cream? Really only the use of vanilla bean pods versus extract only. You get to see the specks of real vanilla bean which also packs way more of a clean flavor punch.

Some vanilla ice creams don’t even use real vanilla extract, instead relying on vanilla flavoring, which is a man-made version. Since vanilla beans are so expensive, this can be a more cost effective route but takes a toll of richness.

Some also use egg yolks (which gives some vanilla ice creams their yellow color), which is technically frozen custard, not iced cream. Instead of the ice cream base, it creates a custard mixture base. Both good, but also different.

If you do not have vanilla beans or don’t want to purchase them (they can be expensive), pure vanilla extract will also do, but won’t have the little flecks.

For this creamy vanilla ice cream recipe, substitute the bean for 2 teaspoons real vanilla extract during the cooling process (not while cooking). And if you really love the flavor of vanilla, add 1 teaspoon extract and also 1 bean. *Mind blown*

To make the best vanilla ice cream, the ingredient list is fairly short. But remember, simple ingredients mean you also should use quality ingredients for the best results. And the best part? There is no high fructose corn syrup like the store bought kind!

I don’t particularly care for store bought vanilla bean ice cream because they use spent pods instead of fresh, loaded vanilla beans, resulting in a muted taste.

A spent pod is a pod that already been scrapped of all its goodness; basically the leftovers. You can learn more about those here.

Vanilla Bean pods will also give it the rich, sophisticated flavor you look for in an awesome homemade vanilla ice cream.

Did you know that the center of a vanilla bean, all of those little flecks, is called caviar? I understand why- it is the gem and what makes these greasy little guys such a commodity and so expensive.

It is important scrape out as much as you can, but then also to boil the (spent) pod to get any left behind and further intensify the flavor. Spent pods can be used to flavor milk or creamer or even to make vanilla extract.

This ice cream recipe is made for use with an ice cream maker. No churn ice cream is great, but they are like comparing apples to oranges.

After making this classic vanilla ice cream, you can add whatever additional flavors you desire, like candy or chocolate chips. Although I think the original recipe is great on its own, my favorite way to step it up a notch is to cover it in Easy Caramel Sauce. Here are a few more options for mix ins:

This easy recipe makes the perfect base to make your own ice cream flavors. Add in some chocolate syrup to make chocolate ice cream. You could cut up some fresh strawberries (or use strawberry syrup) to make strawberry ice cream.

Or you could even get really crazy and throw in some nuts, marshmallows and chocolate and make your very own rocky road ice cream. The options are endless.

You can make the base 2 days ahead of time before churning, but top with plastic wrap pushed down right to the top of the custard. This prevents the film and from developing. If film does develop, simply peel it off and discard it before proceeding.

Once made, store ice cream at all times in the freezer in an airtight container for up to 1 month. 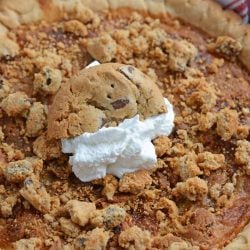 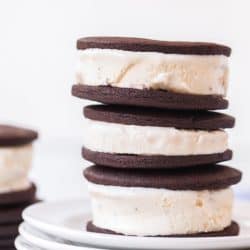 Ice Cream Sandwiches
4.78 from 9 votes
Ice Cream Sandwiches are a frozen delight everyone in the family will love. Make them for your next cookout or have them on standby in the freezer for when you want a delicious dessert.
View this recipe 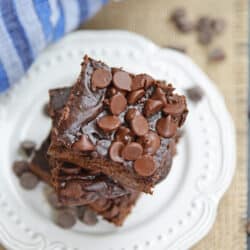 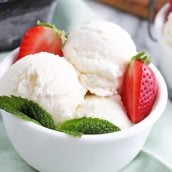 If you don’t have vanilla bean, use 1 teaspoon pure vanilla extract.