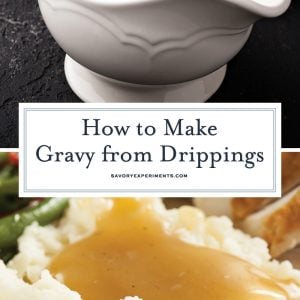 Homemade gravy has never been easier! Learn How to Make Gravy from Drippings, whether you’re cooking chicken, turkey, pork or beef.

Forgot to pick up a jar of gravy from the grocery store? That is about to be the best mistake of your life. Making gravy from drippings is not only easy, but it’s so much more delicious than the jarred stuff. And the same recipe works for chicken gravy, turkey gravy, beef gravy or even roasted veggies for a vegetarian gravy.

Making good gravy sound overwhelming, but no worries. I am going to walk you through it step by step, and also teach you how to fix some common mistakes.

The list is simple and very forgiving so don’t worry if you don’t have the exact volumes. Also, have fun with it and customize it to make your own perfect gravy.

How to Make Gravy with Drippings

Use this easy recipe to make a gravy to accompany any type of meat or meal. The only difference might be in the way you season the gravy.

Be mindful that depending on the hue of drippings and also broth, gravies will be vastly different colors of brown gravy. Chicken stock (chicken broth) is clearly lighter than beef broth and within those, homemade and store bought will also have a lot of variety. The best gravy is really what is YOUR best version.

The world is literally open to anything you want to make this easy gravy recipe your own. Here are a few of my favorites.

How to Get Drippings

So you made the meat, now how do you even get the drippings? Drippings are little flavor bombs, but the liquids in the roasting pan will also have some fat and while flavorful, you’ll want to avoid that. While you can make a good gravy without drippings, best best versions contain them.

Skim this off the top and then use the liquid that remains. If you have time, you can wait for them to solidify and then just peel off the top with a spoon.

If you used seasoning, try to capture some of those in the amount that you use. You can also use more drippings than this recipe calls for, just reduce the amount of broth you add to supplement. Making gravy is very forgiving on exact measurements.

There are a couple of aspects and questions that come up when making any type of gravy at home, but especially gravy with drippings. Let’s address those first.

The first, is undoubtedly, the issue of lumpy gravy. Lumpy gravy is usually the result of trying to thicken the sauce and not doing it properly.

The unfortunate issue is that after you lump it it, no amount of whisking is going to make it a smooth gravy. Those lumps are there to stay. There are only two ways to fix the problem.

How to Fix Salty Gravy

The next issue is that gravy is too salty. Generally this happens because the cook has seasoned the gravy too early in the cooking process and the other ingredients already carried a lot of salty flavor.

Drippings and broth, stock or bullion are all going to carry a certain amount of their own saltiness. Until it is all combined, you won’t know how much, if any, salt is needed.

Depending on the recipe, you might be left with cups of leftover gravy. The good news is that it freezes well and can be used on nearly anything. In fact, some recipes might not have enough drippings to even make gravy!

Leftovers: To store leftovers, simply place in an airtight container and store for up to 5 days. Reheat in the microwave or on the stovetop. It will be slightly gelatinous, but will melt. Resist the urge to add more liquid until fully heated and then make that decision.

Freezing: Freeze in airtight containers or plastic freezer bags for up to 6 months. Gravy can also be frozen into little bits using a plastic ice cube tray. Freeze, pop them out into a freezer bag and you’ve got little single servings. Thaw in the refrigerator overnight.

Chilled and frozen liquids tend to be a little muted in flavor, so you might need to add more salt or black pepper. Taste test it first.

What to Serve Gravy With

The obvious answer is anything you want, but there are a few traditional recipes that pair well. 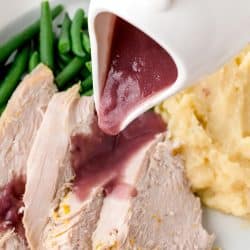 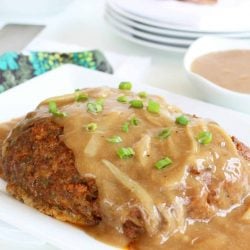 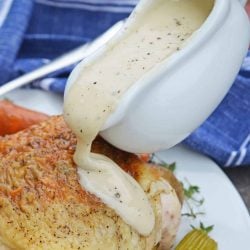 Easy Chicken Gravy
4.55 from 11 votes
Easy Chicken Gravy made with chicken drippings is the best homemade chicken gravy recipe! It takes 10 minutes and ingredients you already have in your pantry.
View this recipe 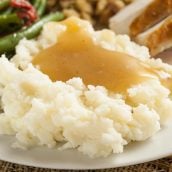 How to Make Gravy from Drippings

For other seasonings, try these options: 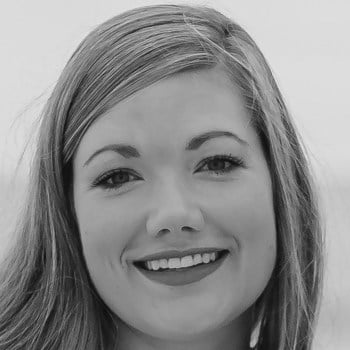