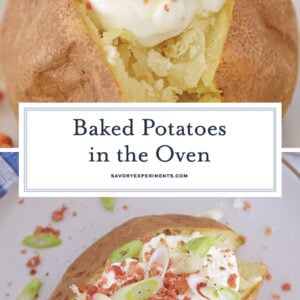 I hope I am not the only that considers a baked potato to be a whole meal. I mean, when paired with a steak it is certainly an expectable side dish, but I am not complaining with a spud alone. A the best baked potato is actually a super easy recipe, double win!

This is the perfect baked potato in the oven has a crispy skin with fluffy inside. Top with butter, sour cream and chives…. or any other toppings you can dream up.

Baked potatoes in the oven are a wondrous things. Fluffy potatoes with a nice crispy skin. When cut open they are a blank canvas waiting to be painted with anything from a sprinkle of salt to leftover pulled pork.

Jacket potatoes is another common term for a baked potato. They are typically served “loaded” which means topped with butter, sour cream, bacon and chives. Some places would also argue this means cheese too.

A basic baked potato is a simple side dish that pairs with nearly any dinner recipe. I can make them ahead of time, seeing they take a while, and reheat in the oven for perfectly crispy skin all over again when I am ready to serve. Store leftover potatoes in an airtight container for up to a week.

PRO TIP: Don’t be afraid to eat potato skins. There are tons of nutrients there!

And one last reason I make baked potatoes all the time: my daughter demands them. I know people are tired of hearing about bloggers personal stories, so I’ll keep this one to two sentences.

My 2-year old calls her old school Mr. Potato Head a “baked potato” and she is obsessed with the thing. She often requests baked potatoes for dinner and since she is quite the foodie, she also prefers a crunchy skin.

What are the best potatoes for baked potatoes?

Really any kind of potato can be baked. Russet Potatoes seem to be the number 1 choice. They have a thick skin and the starchy interior has a sweet flavor and fluffy insides.

They are hardy and can hold lots of toppings (or none at all). They are also fairly large, so one can suffice for a whole meal or a solid side dish. Idaho potatoes come in second, Yukon gold is third and while they are a little bit more waxy, I actually like red potatoes too, but they don’t have the crunchiest of skins.

Other types of potatoes can be baked, but they have less starchy flesh or a thinner skin that makes them not as ideal.

Like so many things in life, there are many right ways to get the same results. The best baked potatoes will depend on your lifestyle- if you are trying to be a little healthier or omit sodium.

Do I need to wrap my baked potato in foil?

If you want a softer skin on your baked potato, wrap them in foil and skip the potato nail. You won’t get a crispy skin because the skin steams instead of crisps regardless of whether you’ve rolled it in salt or not.

But you are rubbing and seasoning your potato, this helps to really get those flavors to sink in. For best results for a crispy skin, I don’t suggest it.

How Long To Bake A Potato?

There are several variables about how long it takes to bake a potato. First is the size of the potatoes, second is type of potato and third is the oven temperature. While I am giving you instructions, this recipe is super forgiving and the temp can be adjusted based on other items you might be cooking.

On average, a medium size Russet potato will take 45-60 minutes in the oven at 400°F. Small potatoes will take about 30 minutes while larger potatoes can take upwards of 90 minutes for cooking time.

The great thing about baked potatoes is they can be baked at any temperature and can be placed right on the oven rack (although putting them on a baking sheet can make getting them in and out a little easier), so they are easy to make alongside other dishes cooking in the oven too.

The internal temperature of a baked potato should be between 200°F and 210°F. Remember carryover cooking will account for a 5° increase in temp, so remove them from the the oven slightly before they reach the desired doneness.

First, let’s say this technically isn’t baked if you nuke it. But sometimes you have a craving and need a potato FAST!

The second warning I will give you is that the skin will not be crispy. There is no trick or secret. Microwaved potatoes do not have crispy skin.

Do not wrap your potato in aluminum foil or use potato nails if you plan to microwave it.

Here is how you bake a potato in the microwave:

You can also make baked potatoes in the Instant Pot or Air Fryer Baked Potatoes!!

Of course the usual easy recipe: butter, shredded cheese, chives or scallions (green onions), crumbed bacon and sour cream. But what are some others that are perfect for a baked potato bar?

We’d love to hear about your favorite baked potato recipe- leave it in the comments! 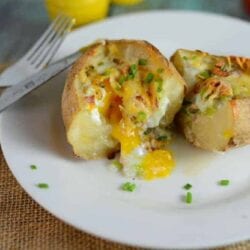 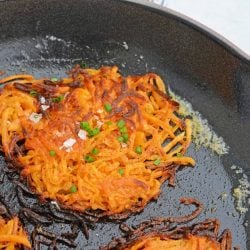 What to Serve with Baked Potatoes: 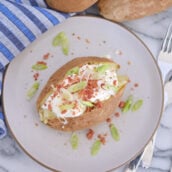 Baked Potatoes in the Oven

To speed up baking a potato, pierce it and then microwave for 3-4 minutes. Microwaving cooks from the inside out, so this will soften the interior. DO NOT MICROWAVE WITH A POTATO NAIL IN THE POTATO. Next, bake for 25-35 minutes.