The photo says it all: Bacon Wrapped BBQ Chicken Stuffed Chile Peppers. *Cue lights from the heavens and the angels singing, this is a GOOD recipe!*

First, a little chile pepper trivia. Did you know that chile peppers are actually a fruit? Yep, the internal edible seeds classify all 100+ varieties of chiles as a fruit rather than a vegetable.

Did you also know that the substance that gives chiles their heat is called capsaicin? Scientists have recently correlated chiles receiving more water produce higher heats (for their species) and those with less water with a milder heat index.

The last great debate: chili versus chile. I recently presented this question to a notable book editor since even the Internet couldn’t give me a concrete answer.

In my experience, everyone has their own reason of why they use which term, but for now I’ll stick with her reasoning so this recipe is for Bacon Wrapped BBQ Chicken Stuffed Chile Peppers. Say that 10 times fast!

Chile peppers range in heat, size, geographic location and season, but ultimately all have a few similarities like the shape, seeds and flesh. Even the skin can vary.

Some are more waxy and better off being roasted and skinned while others have a soft skin that is perfectly easy to eat.

Now that you are armed with a few chile pepper Jeopardy questions, let’s talk about Bacon Wrapped BBQ Chicken Stuffed Chile Peppers. This recipe is simple and versatile.

You can use any type of chile pepper you wish as long as it is cavernous and has fairly thick flesh to uphold on the grill.

While I’ve used poblano peppers because I like their relatively thin skin, I also use Hatch chiles when they are in season and have even been known to make this dish into an appetizer by stuffing jalapenos.

As previously discussed, some chile peppers have a waxy skin that is edible, but not everyone’s cup of tea. While I am fine with noshing my way through it, others aren’t, so choose a pepper that doesn’t have the thickest skin. The bacon and heat will help soften it as well.

For these stuffed chile peppers, I carefully removed the seeds from the inside of each pepper, stuff them with BBQ chicken, wrap each one with bacon, grill to perfection and then drizzle with agave nectar to complete the dish.

They were wildly popular at my home, as I am sure they will be at yours as well!

One thing to keep in mind is when you are picking out your chile peppers, aim for ones that are “roomy”- if they are collapsed you will not be able to fit in as much BBQ chicken and that would be disastrous.

Also check out these chile recipes:

Sides to serve with your BBQ Chile Peppers: 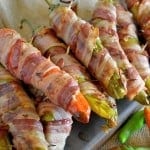