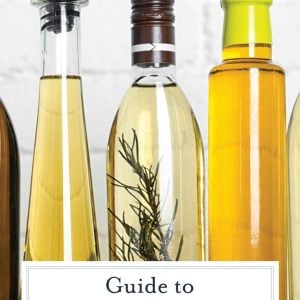 Fats are integral to good cooking. Think of them as a conduit or a carrier of flavor as well as flavor themselves. Without them, we wouldn’t have seared steaks, french fries, or even mayonnaise.

Oils make up a large part of the fats we use in cooking and knowing which oils are good for what will help you tremendously in the kitchen.

The first thing to know is that not all oils are created equal meaning that not all oils are good for all things, so there really isn’t a best cooking oil. Some are great for salad dressings, others for frying, and there are some that are specifically for finishing a dish. This comes down to two things: flavor and smoke point.

Each oil has its own unique flavor which adds to the overall taste of whatever you are cooking. Some are on the more neutral side of the spectrum while others are bold. Knowing where they stand and what they bring to the table on the flavor front will help your cooking immensely.

Equally important is the oil’s “smoke point”. This is a unique chemical makeup that determines the point at which a particular oil will start to smoke and/or burn on the heat. Smoke points can range from 325 F to more than 500 F.

Sometimes smoking oil is inevitable at the beginning of a cook (read stir-frys and the like,) but smoking oil throughout the cooking process is an indication that your oil is breaking down. When they do this they can impart a bitter flavor on the food and some have “free radicals” that aren’t great for your health.

Bringing an oil to or past its smoke point can negatively impact your dish from a flavor and visual front (little charred black bits) and let’s be honest, if it doesn’t taste good, why are we even bothering?! Keep an eye on the smoke point when using oil.

With that in mind, let’s walk through the particulars and demystify some of the most common oils you will see in recipes and on the grocery aisle shelves.

This oil is made from the pressing of the fresh olive fruit of the olive tree. These trees are grown in places like Italy, Spain, Greece, and California, it is popular in Mediterranean and European cooking and found in kitchens all over the globe.

When shopping for it at the store, you will notice that it comes in a variety of styles. These styles differ in terms of the way the oil is extracted, not the type of olive used. The most popular is extra virgin and simply, virgin olive oil.

Extra virgin olive oil is the most flavorful, often having a grassy or fruity taste, that then becomes part of the dish it is used in. It ranges in color from a deep golden hue to a light green color.

It is typically cold-pressed which means it is made by a chemical-free process and is one of the reasons it is higher in cost. I often reserve these for cold dishes, dipping bread, and salads so you can really taste what they have to offer.

Virgin olive oil is made in a similar fashion although the standards for it are not as stringent as the EVOO. This style has a less prominent flavor and a higher acid content. It is a great oil for universal cooking.

This is a type of oil that is derived from the rapeseed plant. In other parts of the world, it is referred to as rapeseed oil. To say that it is a workhorse in the kitchen is an understatement.

Canola oil has a neutral flavor and a high smoke point which makes it a popular choice for all sorts of deep-frying, sauteing, and baking among other things. It is commonly used as an alternative to vegetable oil.

Great for high heat cooking like a stir fry, avocado oil is made from the pressed avocado fruit. It has a relatively neutral flavor and would be great for deep frying if it weren’t so darn expensive.

High in monounsaturated fat (you know, the stuff that is good for you), it is a great oil to have on hand. Be sure to keep it in a cool, dark cupboard.

Known for its high smoke point and relatively clean flavor (read it plays well with others,) grapeseed is a workhorse in the kitchen. Pressed from the seeds of grapes, it is an abundant by-product of winemaking and a less expensive alternative to olive oil.

Grapeseed oil is equally great for sauteing and searing things like steak as it is for making a delicious salad dressing or finishing some crudo.

At room temperature, this oil is in a solid state and is often used with or in place of butter for baked goods. It has a scent and flavor that is reminiscent of the tropics without changing the flavor of the dish too greatly.

Coconut oil is made from the pressings of the kernel or meat of mature coconuts. It has a relatively low smoke point so it is best for cooking on medium heat or for quick cooks.

This oil comes in two varieties: sesame oil and toasted sesame oil. Be sure you grab the right bottle for the right use.

Keep in mind that toasted sesame oil has a lower smoke point making it better for finishing dishes as opposed to cooking. Heating it again runs the risk of having it turn bitter.

Like walnuts themselves, walnut oil tends to be on the more expensive side of the spectrum.

This oil is light, nutty, and packed with antioxidants, but does not stand up well to heat. This is best as a finishing oil or vinaigrettes to put on a salad, roasted vegetables, or certain meats.

Peanut oil has a high smoke point making it great for all kinds of high heat cooking. It is often favored for deep frying and somewhat prominent peanut flavor, some more than others. The brand I buy doesn’t taste like peanuts at all.

It is also available in a roasted variety. Much like sesame oil, the roasted oil should only be used as a finishing oil.

Keep in mind that anyone with a peanut allergy should not use peanut oil and if you are cooking for others, please mention this to avoid a potential reaction.

Most often, vegetable oil is a blend of oils made from various seeds. Most often these seeds include rapeseed, safflower, peanut, sunflower, soybean, corn, and more.

This type of oil is unique that it doesn’t have a prominent flavor. It’s neutral nature, allows your ingredients to shine through. It has a relatively high smoke point, which makes it ideal for cooking, frying, and baking. Oh my!

It is considered to be the most all-purpose oil for cooking, but isn’t the best for finishing and dressings since it has virtually no flavor.

How to Dispose of Cooking Oil

The first rule- DO NOT POUR IT DOWN THE DRAIN! The right way to get rid of oil or grease is to throw it in the trash can. Or, for things like bacon or duck fat, save them for frying later and then throw them in the trash can.

After the large mass is disposed, use a paper towel to wipe down more large bits, throw that away.

Then you are safe to use hot water and soap to rinse the rest. The small amount of residue reaiming won’t be enough to clog your pipes, but be mindful that this can build over time, so make sure the majority is removed.