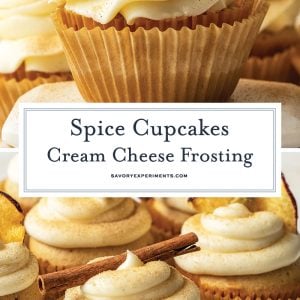 No monkeying around with cake layers or even a sheet cake and worrying about flipping it out and over without cracking.

What are Spice Cupcakes?

They are very similar to gingerbread, molasses cookies, pumpkin cake and carrot cake all in one.

The ingredients needed are kitchen staples, with the exception of maybe cream cheese.

Some variations include adding maple syrup, pumpkin pie spice, apple pie spice (any warm spices) or even a heaping spoonful of sour cream for tang. Cake flour can be used, but we liked all-purpose best. Walnuts and pecans pair nicely, or a handful of mini chocolate chips or pumpkin spice chips. Dark brown sugar can be used instead of light. Alter the amount of spices to your desired potency.

The most traditional frosting is a cream cheese buttercream frosting. Cream cheese frosting happens to be my favorite frosting flavor, so I rarely deviate. But if I were to venture outside of my comfort zone, I’d do a browned butter, brown sugar or maple frosting.

Here is what you’ll need:

We’ve made cream cheese frosting from scratch for ours, because let’s face it, homemade frosting is the best! But… you can always grab a tub from the store to spare some time and we won’t tell. You did make the cupcakes from scratch, at least.

Garnish with whole cinnamon sticks or star anise (although not edible), a dusting of cinnamon or dried apple slices. Cupcakes can also be drizzled with caramel sauce or bourbon sauce. Cinnamon sugar also works well.

Or use store bought frosting and swirl it with ground cinnamon for cinnamon cream cheese frosting or caramel for caramel frosting.

Or did you? Making homemade cupcakes isn’t really much more challenging than a box mix. The majority of ingredients are pantry staples, but should you decide that you need to save that time, you can transform a box mix into spice cake in no time at all.

Start with a box of white or yellow cake mix and prepare according the package directions, but add the same amounts of cinnamon, nutmeg, allspice and ginger to the batter along with 1 tablespoon of brown sugar.

Bake according to package directions. Use premade cream cheese frosting.

Store cupcakes in an airtight container at room temperature. Putting them in the fridge will dry them out. Cupcakes will stay fresh for up to 5 days.

If you plan to freeze your cupcakes, wrap well before frosting and then freeze unfrosted. Thaw at room temperature until fully thawed (about 1 hour) and then frost. 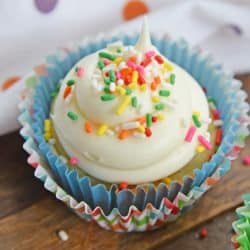 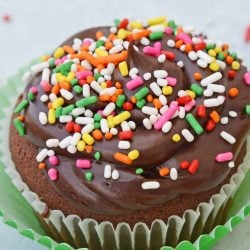 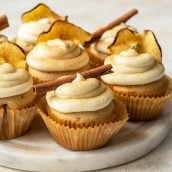 This post was previously sponsored by Pillsbury, but the product being promoted has since been removed from the market. To reduce confusion, we’ve updated the post with currently available items.