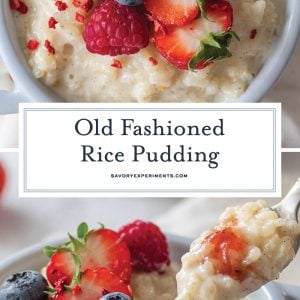 There are loads of rice pudding recipes out there, but this one is creamy, comforting and feels like a hug! Not only is it easy to make, but it’s also fragrant and full of flavor!

We all know and love the old-fashioned rice pudding that our grandmothers whipped up within minutes. Whenever you’re in need of sweet comfort food, this is hands down the easiest recipe.

What I love most about this easy recipe is that it can be served both warm and cold. On hot summer days, serve a bowl of cold rice pudding topped with seasonal fruit. During cold winter nights, cuddle up under a blanket with a warm bowl topped with jam or dried fruit.

This easy rice pudding recipe only requires a pot and a stovetop, with no baking required. Spiced with cosy flavours of cinnamon, honey and vanilla, this dessert is the ultimate comfort food.

What is Rice Pudding?

Rice pudding is a type of dessert made from rice, milk, and sugar. A wide range of flavors can be used, from cinnamon to citrus or vanilla. Some versions also include butter or a custard, which enrich the dessert and make it creamier.

It is typically creamy and sticky, and it can be served both warm and cold. This dessert can be topped with either jam, dried fruit, or fresh seasonal fruit.

Depending on the recipe, rice pudding can be either boiled on the stove or baked in the oven. Both methods yield a similar creamy consistency, with the baked version having a crust on top.

Although the origin of this easy rice pudding dessert is difficult to pinpoint, many people believe it originates from South or East Asia. Countries such as India and China have ancient rice cultures that spans back many centuries.

Back in medieval Europe, rice was very expensive, so only Kings and Queen could afford to import it from Asia. Rice pudding was a favourite among the British monarchy, with the earliest recorded recipe dating back to 1390! Back then, this creamy dessert was known as ‘rice pottage’.

A 17th century recipe adds currants, cinnamon, and barberries to rice pudding. The mixture is then stuffed into sausage skins, then roasted before serving. However, worry not. Today’s recipe is definitely not stuffed into a sausage!

Rice pudding became widely used in the 20th century when rice finally became cheap to buy. Schools and hospitals started serving rice pudding as a daily treat because of how easy it is to make.

Nowadays, rice pudding is definitely a more complex dessert, with various flavours and toppings added to enhance it.

Due to its popularity and simplicity, this old fashioned dessert can be found in many different countries around the world. From America to Europe or Asia, this comfort food is present everywhere.

Here are some examples and variations of rice pudding from across the world:

Rice is the most important ingredient in this classic recipe, so it’s important to choose the right type. Regardless of the type of rice used, it is crucial to use uncooked rice for best results.

Arborio rice (risotto rice): the best option, as it yields an extremely creamy and sticky rice pudding. This type of rice also holds its shape really well when cooked, without becoming too mushy.

Medium grain rice: the second-best option. This type of rice cooks very well and similarly to arborio rice, it holds its shape very well. This rice also produces a creamy rice pudding, but without being too soft.

Long grain rice: can also be used, but the pudding will not be as creamy. You will have to keep a very close eye when cooking this type of rice as it can become too soft.

And if we are being honest, sometimes I even just make small batches using whatever leftover rice I have on hand. With the exception of wild rice or yellow rice, that would be weird!

You’ll need a short list of kitchen staples to get started.

How to Make the Best Rice Pudding

The best part about making a good rice pudding is that it requires no preparation time and only requires one pot. Let’s look at how simple this recipe is to make:

Sure you can serve a plain serving bowl and it will be super delicious, but don’t you also want to make it pretty? Here are some easy ways to spruce up your dish.

Making Ahead and Storing

This easy rice pudding recipe is best served fresh, but it can also be made ahead. There are a few options for making this creamy rice pudding in advance: 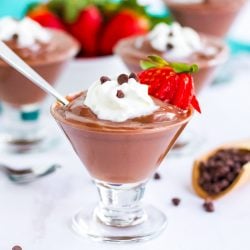 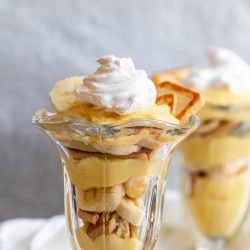 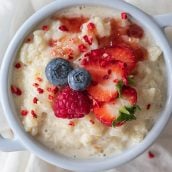 5 from 6 votes
This easy rice pudding is creamy, comforting and feels like a hug- just like grandma used to make it! Not only is it easy to make, but it’s also fragrant and full of flavor!
Prep Time: 5 mins
Cook Time: 30 mins
Total Time: 35 mins
Servings: 6
Print Recipe Save Saved! Rate this Recipe