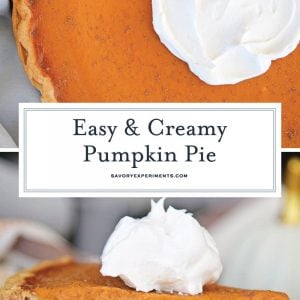 This is the best foolproof pumpkin pie recipe with NO cracks and a delicious, creamy custard center made from REAL PUMPKIN!

If you haven’t heard my spiel about how canned pumpkin isn’t actually pumpkin, keep scrolling…

Pumpkin Pie is probably the second most iconic dish served on Thanksgiving. Second only to the Thanksgiving turkey, of course. And since it is a PUMPKIN pie, it only makes sense to make sure you have the best and most pumpkiny filling ever.

The tradition of pumpkin came about simply because it was the crop being harvested at the time of the first Thanksgiving celebration. While many squash dishes are savory, pumpkin was sweet.

Pumpkin pie is actually considered to be a custard. It’s egg based and doesn’t contain flour. It can be made in or out of a crust (if you are looking to cut some carbs and calories).

PRO TIP: You can use any type of crust you’d like. Gingersnap crust. Traditional butter crust. Graham cracker crust. No crust.

Custard pies are delicious, but most people have one main issue: they CRACK. Eggs coagulate (turn from liquid to gel) when heated. This creates a pucker and thus, cracks.

I have written an entire article on why pumpkin pies crack, how to prevent them from cracking and how to fix cracks when they do happen.

There are only two things I don’t like to make from scratch and one of them is homemade pie crust. So I buy mine frozen. Don’t be ashamed, we all have something. I do, however, have a recipe for homemade pie crust that one of my contributors so kindly provided.

I use suggest a deep dish pie crust instead of a standard size, which is shallow and results in more crust than pie. Let’s face it, we are all here for the pie!

For this recipe, it should just fill right up to the top of a deep dish crust. You can use a traditional shortbread crust, graham cracker or even gingersnap. If using standard, you might even get a scant two out of it, but the cooking time will be reduced.

Or, as we have discussed, make it a crustless pumpkin pie. Be mindful that you’ll be scooping out the filling. Chances are (since it is custard) that it won’t nicely cut and lift out like a traditional pie if it doesn’t have a crust to contain it.

One thing you shouldn’t skimp on, though, is making your own pumpkin puree. Did you know that most canned pumpkin filling isn’t actually pumpkin at all?

The FDA has very loose criteria for pumpkin and actually allows most squash to be considered pumpkin. Because it is more expensive and sometimes lacks color and flavor, companies use a blend of squash and sometimes ZERO pumpkin.

PRO TIP: Use a small pie pumpkin for pumpkin puree- it has more flavor and is sweeter than larger, pumpkins meant for carving.

Use my easy homemade pumpkin pie puree recipe to avoid this issue. Be mindful that real pumpkin also varies in color. Some will be a bright orange and others might be paler. Regardless of color, it will surely taste better.

Like most squash, pumpkin itself doesn’t have a tremendous amount of flavor. Instead the flavor comes from sugar and pumpkin pie spice, a traditional blend of warm, fall aromatics.

I do encourage you to make your own pumpkin pie spice mix. It is a forgiving blend, but gives you the power to amplify the flavors you love and scale back on those you don’t.

PRO TIP: Place your pie on a baking sheet. It makes it easier to transport your pie pans from in and out the oven and also catches any pumpkin pie filling that might bubble over.

For me, I love ginger and cloves. Their fragrance lights up my kitchen with the scent of the holidays, so I add a little extra to my spice blend. It can go into everything from your coffee to pumpkin fluff.

Now onto this pie. My easy pie recipe is pretty standard, but with one secret ingredient: sour cream!

Sour cream amps the creaminess factor and adds a tiny bit of acidity that helps bring out the natural flavors and balance the sugar.

The other ingredients are pretty standard.

How to Make Easy Pumpkin Pie

You could serve this pie with anything you’d like, but whipped cream is probably the most standard adornment of a slice of pie.

You could also feel free to make it a la mode and add a heaping scoop of vanilla bean ice cream!

ONE. Most recipes call for a 15 ounce can of pumpkin puree. This is technically 1.8 cups in case you are making your own or measuring it out of a larger can.

This recipe is very forgiving, so you can use anything between 1 3/4 – 2 cups of pumpkin puree.

TWO. If you are one of those pumpkin pie spice obsessed folks (those of you smiling at your computer screen right now know who you are….) then add an additional 1 teaspoon of spice to your mix.

Apple pie spices also work but won’t be as heavy on the cloves.

Don’t fill your pie shell to the very brim. It will inevitably bubble over and the sugar will burn. Place your pie on a baking sheet to prevent burning if it does boil over and also to make it easy to get it in and out of the oven.

FOUR. Since this pie is a custard, it must be refrigerated after baking.

FIVE. You can freeze your pumpkin pie! Freeze it by the slice so you can just pull one out when the mood strikes.

SIX. If you don’t have evaporated milk, use half and half. Make sure you aren’t using sweetened condensed milk, as that already has sugar and evaporated milk does not.

If you are using a pumpkin pie filling, then you just need to pop open the can, fill the crust and bake. There should be instructions on the can.

EIGHT. Crust savers don’t work so well on custard pies because they can mar the delicate filling.

Same with a loose piece of aluminum foil tented over the top. If you care more about taste and less about aesthetics, then go ahead use either of these and then frost it to cover up any blemishes.

NINE. The most common issue with baking a pumpkin pie is how to prevent the filling from cracking. The main ways to prevent this are to cook at a lower temperature and on the lower half of the oven.

The lower portion of the oven is hotter and also has the most consistent temperature.

You can also place in a very shallow water bath, much like a cheesecake, but I’ve found this to be unnecessary.

Why did the center of my pumpkin pie fall? Chances are that it cooled too quickly. To prevent this from happening, cool your pie in the oven so the temperature change isn’t as drastic. Crack the oven door and cool for 1 hour.

If it has already happened, you can frost your pie with a spiced whipped cream frosting to hide the issue. Hop over to my post on how to fix cracks for the recipe (scroll to the bottom).

My filling is pretty liquidy, is that right? Custard pie filling start pretty liquidy. As the eggs coagulate, it will set and solidify.

How long does pumpkin pie last? I would say it is best eaten within 24 hours, but will stay good in the fridge for up to 5 days.

Can I eat pumpkin pie hot? That is up to you! Most custard pies are eaten room temperature or chilled, but if you prefer it hot, give it a quick zap in the microwave. 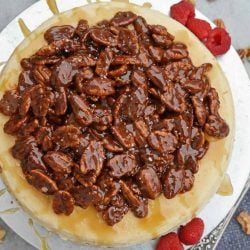 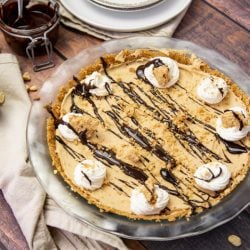 No Bake Peanut Butter Pie
5 from 6 votes
Decadent and silky, this easy Peanut Butter Pie is a no bake dessert recipe that utilizes only 8 ingredients to make the crust, filling, and toppings!
View this recipe 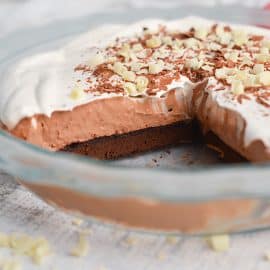 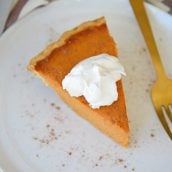