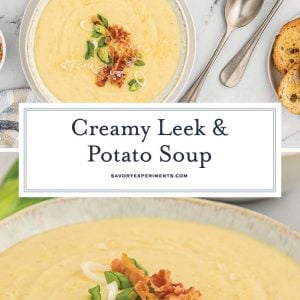 The winter months are synonymous with curling up next to the fireplace with a piping hot bowl of soup. The kind of soup that sticks to your ribs. Comforting soup like Creamy Leek and Potato Soup.

The next time you have a hankering for a French classic dish, this smooth soup is a great recipe that the whole family can enjoy. Even the pickiest of eaters.

With a blizzard coming to Baltimore, I decided it was the perfect time to prepare an entire French meal, kicking it off with Creamy Leek and Potato Soup.

And I obviously, wasn’t going to stop there. I had time on my hands. My entree was a sticky French Baked Chicken made with orange marmalade and olives and then an Endive & Ham Gratin.

All a little out of what my normal, daily cuisine looks like, but all equally delicious! Sometimes it is fun to really step outside the box and try new things.

That said, many other countries have claimed it too. And why not? It is flipping delicious! Not to mention easy to make, cost-friendly, and something even the most picky eaters will enjoy.

How to Make Leek and Potato Soup

You can store any leftovers of this soup in the refrigerator in an airtight container.

This creamy potato leek soup freezes wonderfully, so I like to make a bog batch and then freeze the rest for later. While you can freeze individual portions and top them beforehand, you can also freeze it in bulk and top it with fresh ingredients when you reheat it. Talk about easy peasy! 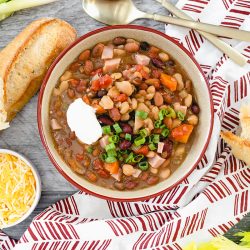 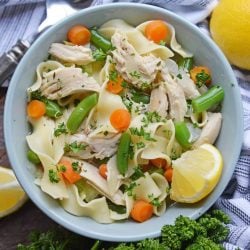 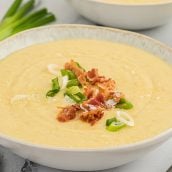