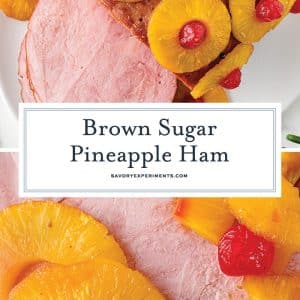 When it comes to holiday dishes, it doesn’t get more classic than a ham with pineapple and cherries. Easter, Christmas, Thanksgiving… just about any holiday is better with glazed bake ham.

Ham is a traditional favorite holiday meal, but pineapples and cherries really take it over the top. While initially it might sound like a funny combo, they make perfect sense.

Sweetness in fruit tones down the salty and briny flavors from cured ham and also adds vibrant color to the otherwise ho-him brown ultimately creating a centerpiece instead of just an entree. This is why brown sugar, molasses and other sweet flavors are often used to crust and glaze the iconic dish.

Some tell me ham is ham and I am going to tell you that just isn’t the case. Choosing the right ham for the recipe is in fact pretty important, although you can easily modify based on the cut you have.

What is ham? Ham is pork leg that has been cured, and sometimes smoked. Curing uses salt, resulting in the salty brine taste that it is known for. Some hams are whole, like a bone-in, and others are mechanically pressed to form a nice little package without bones. Ham is fully cooked.

While bone-in looks more impressive, most folks will opt for a spiral cut ham to prevent from having to carve themselves. These are great, but a little more challenging to prepare for a baked ham recipe like this because the slices will literally start to fall off.

I used a boneless ham for this recipe. It isn’t sliced, so it is nicely dotted with cloves, pineapple slices and cherries. It also has some fat removed so it is slightly leaner. Boneless makes it easy to carve. You can use a spiral ham, but it will be a little challenging and you might need to tie together the cut pieces with cooking twine.

Many recipes will call for you to score the ham before cooking claiming that the glaze will penetrate the ham for flavor. LIES!

Scoring used to be used to cut through a thick fatty layer on the exterior. Now days, most don’t have that. Scoring can also dry out your ham faster. The rind protects tender, juicy meat inside, but if you break through that the barrier is lost and now it has the tendency to dry out.

And as far as flavor, a ham is far too dense, thick and already cooked to be infused with that much flavor all the way through. The glaze is important and will give you a lovely crusty brown sugar taste, but never, will it ever reach the center, or even 1/2 inch into, a ham.

This is also why I reserve a portion of my glaze to be basted on after carving.

Some, like this one, will come with a diamond pattern or little indentations from the packaging. This is different from scoring and isn’t removable and will not dry out your roast. But it does look pretty!

Why Put Cloves In Ham?

This is a fad that started in the 1950’s along with JELLO molds and other odd culinary creations. But unlike some of those, this one stuck around.

The reason? It provided more than just an “unusual” flavor. Clove and ham complement each other. But like the glaze, sticking a few tiny cloves into a ham isn’t going to penetrate flavor to the core.

It does give off a lovely aroma while baking and gives flavor to the glaze and fruit. They need to be removed before carving. While they won’t hurt you if eaten, they aren’t pleasant. Kinda like chewing on a fragrant twig.

How Much Ham Per Person?

If serving a bone-in ham, estimate 1/2 pound per person. The bone itself will account for a large volume of the total weight when purchasing.

If serving a boneless ham, you can dial it back a bit with 1/3 pound per person of total roast weight.

One of the most important elements in the brown glaze recipe. Mine is made of only three in ingredients:

The perfect pineapple ham glaze is a mixture of sweet, savory and acidic to balance a salty cured ham. From here you’ll need pineapple rings, maraschino cherries and whole cloves. I used an 8 pound ham and needed about 10 pineapple rings.

This glaze is a little watery, as I like to focus on the fruit rather than a sugary crunchy glaze. If that is what you are going for, double the amount of brown sugar.

I also reserve a small amount for basting after the ham has been sliced, this adds some flavor to the interior which otherwise doesn’t get any of the sweet goodness.

If you don’t want to use pineapple juice, opt for ginger ale, orange juice, water, white wine or even maple syrup, but reduce the volume by half and know it will be super sweet. A pineapple glaze really makes this recipe special.

This process always seemed kind of silly to me. So we are going to make the ham all pretty, bake it and then present it in the pretty form to our friends and family before whisking it back into the kitchen, totally disassembling it, carving it, transforming it into an entirely different looking dish and then making it magically reappear?

Pineapple rings actually protect the skin of the ham from burning and prevent it from getting rubbery. Much like a cheesecloth on a turkey or salt on a steak. Since hams are so thick, it takes a long time to heat it all the way through.

The are, of course, also ornamental and let me tell you, nothing beats the sticky flavor of a caramelized pineapple ring with a bite of glazed ham.

Maraschino cherries are real cherries, but have been pitted and then soaked in a heavy sugar syrup. Typically seen in cocktails and desserts, they are also perfect for hams.

While pineapple serves a practical purpose, cherries do not other than offering more color, flavor and making the perfect little ball for securing pineapple rings, so they are optional.

How to Make Pineapple Ham

The is and easy recipe, but you will need to be present to baste the ham every so often. Hams are already cooked, so really you just need to reheat and create the delicious, fruity exterior.

How do I reheat ham? It is easy! You can do it in the oven at 350, covered with aluminum foil, for about 15 minutes. It it is already sliced, as opposed to be a large chunk of meat like it was when you cooked it originally, it won’t take nearly as long.

You can, of course, reheat it in the microwave, but any meat heated this way gets a little rubbery and the goal is another meal of tender ham.

Can I freeze pineapple ham? Yep! But word to the wise, the pineapple and cherries won’t defrost as well as the actual ham. They are made up of a lot of water, so they thaw a little soggy and limp. If you are planning on making ahead of a holiday dinner, I would not recommend this. It is, however, acceptable for leftovers.

Serve it alongside a Thanksgiving turkey, Christmas dinner or even for Easter dinner. The meal will be great, but the leftovers will be even tastier! Transform them into a fantastic ham sandwich! 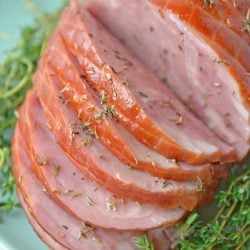 Thyme Honey Baked Ham
5 from 5 votes
Thyme Honey Glazed Ham is a light and flavorful ham glaze recipe the whole family will enjoy. Simple to make and delicious to eat!
View this recipe 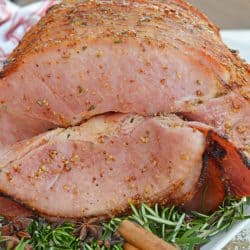 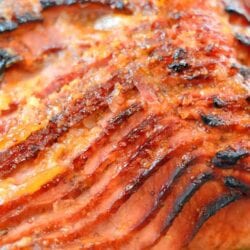 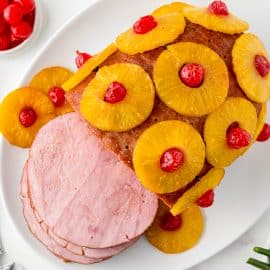