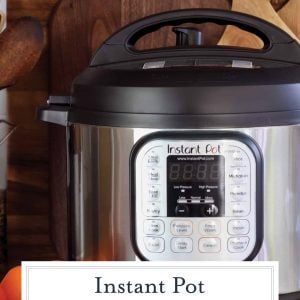 The Instant Pot isn’t nearly as simple or “instant” as you might think it is. In fact, they are pretty complicated and many folks never use half of the functions available.

So you have an Instant Pot. Now what? Here I will give Instant Pot 101- a crash course in how to understand and use your Instant Pot.

I’m going to try and answer a few of the most commonly asked Instant Pot questions and give you some basic Instant Pot guidelines. Feel free to leave me YOUR question in the comments section or scroll to the bottom to get Instant Pot How To Videos!

What is the Instant Pot?

It is one appliance that has many functions: electric pressure cooker, rice cooker, steamer, yogurt maker, sauté pan, slow cooker and warmer.

The function that most people praise the Instant Pot for is the electric pressure cooker feature, but I LOVE its slow cooker feature- see below as to why it is so much better than a traditional slow cooker!

Yes and no. They still have a danger factor, but knowing how to use yours will prevent injury. The Instant Pot has a safety feature of locking until the pressure is released an safe to open so there is no guessing.

However, the “quick release” function, also known as “venting” or QR, releases some pretty hot steam that could easily cause harm or injury. Your Instant Pot is locked when the little metal piece right next to the valve is UP.

Do I need to use liquid?

Yes, by definition, pressure cookers need some amount of liquid to build pressure. You need at least 1/2 cup to 1 cup of liquid for your Instant Pot to work.

For dry foods, more is needed, but if you are using water containing foods, like vegetables, less is needed.

What can I make in the Instant Pot?

Most people think of fried chicken when they think of electric pressure cookers, but you can make so many things. Chuck roasts will be fork tender, chicken will shred in just 10 minutes and seafood will be done in 4 minutes.

You can also make desserts, such as cakes and puddings, cheese, yogurt, broths, stocks and stubborn grains like quinoa, sorghum and steel cut oats in just minutes.

Why isn’t the timer starting right away on my Instant Pot?

I think one of the things that frustrates me the most about recipe writers for the Instant Pot, they never include the amount of time it takes for the pot to build pressure or heat.

If you are starting with cold or frozen foods, it will take longer to come to pressure (see what this means below), whereas hot or previously simmered/sauted foods won’t take as long. Plan for anywhere between 10-15 minutes additional time for the Instant Pot to come to pressure.

What is NPR or natural pressure release?

Natural pressure release is sometimes abbreviated to NP or NPR. It basically means you are going to gradually (and naturally) allow the pressure to release.

This process takes about 15-20 minutes. Food will continue to cook while on natural pressure release.

What is QR or quick pressure release?

It is the opposite of NPR. Instead of allowing the pressure to gradually release, you vent it out super fast. Be careful though, this steam is HOT and can cause injury.

Also, don’t do it under your cabinets or around anything that has a painted finish- it will literally peel the paint. Release pressure in an open space on the counter.

What is venting and sealing?

The knob on the Instant Pot has two settings: venting and sealing. Venting means that you are not building up pressure at all, instead the pressure and steam is releasing during the cooking process.

This is used for steaming. Sealing means that you are pressure cooking and all of that good stuff is staying inside the Instant Pot.

PIP stands for “pot in pot” cooking. Basically, another pot that goes into the inner pot. You need this for casseroles, cakes and if you want to cook multiple things at once.

The Instant makes some fabulous cheesecakes! These are the ones I use the most:

Do I still need a slow cooker if I have an Instant Pot?

Technically, no, the Instant Pot is also a slow cooker.

One of the things I love about the Instant Pot as a slow cooker is that I can use the Saute function either before slow cooking to brown the meat or at the very end to reduce or thicken sauces, eliminating the need to use even more dishes.

How do I use the trivet?

The trivet can be used in multiple ways. Put the “legs” down and you can cook two things at once- meat on the and set the steam basket on top or vice versa or… put the “legs” up and now you can use them as handles to pull out things like the springform pan.

Why does my Instant Pot smell?

It is most likely due to the silicone sealing ring. This ring holds in smells like no other. You can buy extras and use one for savory dishes and another for sweet meals. I have one I use just for curry.

Also, make sure to rinse the lid of the Instant Pot to get out smells. Many folks wash the inner pot, but not the lid! The rings are cheap.

What is the difference between low and high pressure?

First understand PSI, pounds per square inch. The PSI determines just how hot the cooker is going to get beyond the regular 212 Fahrenheit temperature, the boiling point of water at sea level.

Low pressure items might need to cook longer, but will benefit in the texture from lower pressure.

How do I use the Instant Pot at high altitude?

Some say that a pressure cooker defies nature and that altitude doesn’t matter, but anyone who lives in a high altitude area (3,000 feet above sea level) will tell you that isn’t true.

According to the New High Altitude Cookbook, cooking time under pressure should be increased by 5% for every 1,000 feet after 2,000 feet above sea level. Here is our handy, dandy calculator!

Is it necessary to do the Water Test?

Yes! To make sure your Instant Pot is safe and comes to correct temperatures for cooking, do the water test. It really doesn’t take long. Watch this video to see how to do it. Video is from Instant Pot!

For even more videos about how to use your Instant Pot, visit their website at instantpot.com.

If you enjoy using the Instant Pot, you’ll probably also love an Air Fryer! here is a collection of our favorite Air Fryer Recipes!