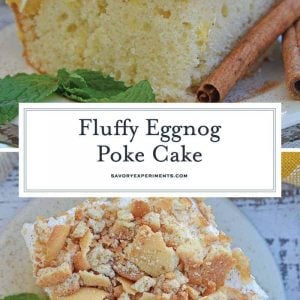 This Eggnog Poke Cake uses box cake mix and instant pudding for an easy poke cake recipe that’s just so delicious. Perfect for the holidays, it’ll become one of your favorite recipes that use eggnog!

We are all about keeping it real over here in the Savory Experiments kitchen and today was a perfect example of this.

I decided to bake my cake in a ceramic dish that was none of the specifications on the box of cake mix.

And then… it didn’t bake evenly so I had to lop off the top so it wasn’t a mounded poke cake! Stuff happens. If you don’t want to do the same thing, it’s probably a good idea to follow the specifications of the cake mix.

Baking blunder aside, I’ve got to say this Eggnog Poke Cake is probably my new favorite recipe that uses eggnog.

I know peppermint and gingerbread are the typical flavors associated with this time of the year but I have to say I may like the flavor of eggnog even more than those two.

And since eggnog is only popular for 2 months of the year, you can bet I’m whipping up as many recipes that use eggnog as possible!

What is eggnog? For those not familiar with this traditional holiday beverage, it’s a creamy, dairy-based drink that typically contains egg, cream and some other flavors.

You can either buy it in the store like milk or make it yourself (I buy it at the store)! Alcohol, like rum, is also frequently added to eggnog, but it isn’t actually alcoholic on its own.

Pudding poke cakes have become a favorite of mine lately. They’re so much more moist, flavorful and creative than most regular cakes made with a box mix but only take a few extra steps to make.

If you’ve never made a pudding poke cake before, they are typically made with a box cake mix which you poke holes in after baking and then pour pudding over them.

For this Eggnog Poke Cake recipe,  I used a regular white or yellow box cake mix prepared as normal, with the addition of some vanilla extract, and instant vanilla pudding which I turn into eggnog pudding using just two ingredients.

Then for some extra texture, I topped the entire thing with Nilla wafers.

I gotta say, this pudding poke cake will be made more than once in my house this holiday season! So easy and so good!

You may like these other easy holiday dessert recipes: 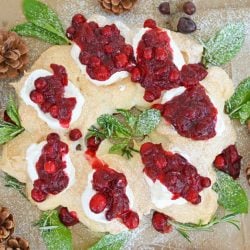 Holiday Meringue Wreath
4.75 from 4 votes
If you're looking for the perfect showstopping holiday dessert, look no further than this Meringue Wreath! A beautiful holiday pavlova with whipped cream and fresh berries.
View this recipe 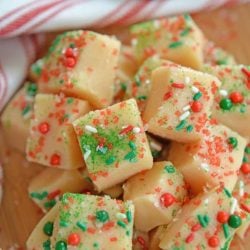 Christmas Fudge (Almond Fudge)
4.72 from 7 votes
There is no better classic fudge recipe than this Christmas Fudge! Basically an almond fudge topped with festive sprinkles, it's perfect for cookies trays!
View this recipe 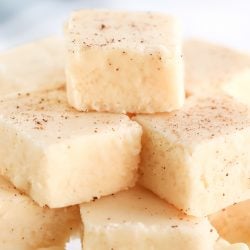 Eggnog Fudge
4.13 from 8 votes
This Eggnog Fudge is buttery, creamy Christmas perfection made with an eggnog base, marshmallow cream, white chocolate and seasonal spices!
View this recipe 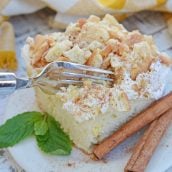 *Most 5. ounce pudding mixes call for 3 cups of liquid, but double check and use as much eggnog as it calls for cold milk.