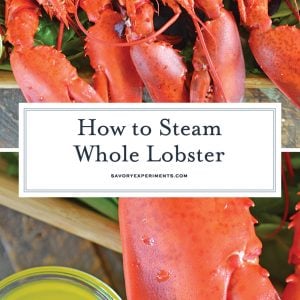 You have a special night planned and your brain goes to what equates to “fancy dinner”. Lobster, of course!

A bright red beacon, steamed lobster is quite the attention grabber.

But there are a few things you should know before you decide to make a whole lobster for your special occasion… especially if you’ve never done it before.

I’m not trying to scare you off. I love making (and eating) whole lobster. It is a social experience and should be a fun family event. I just pride myself on being honest and I don’t want you to commit to something you might not enjoy.

Before you get started…

ONE. Most lobster is sold live. Some places will steam it for you, but it is certainly best right after cooking and not reheated. This means you will be dispatching (killing) the lobster yourself.

TWO. Eating whole lobster is messy. Water from steaming (or boiling), tomalley, organs and intestines are all in there along with its buttery meat.

You know when you devein a shrimp? Well, lobsters have the same issue and some might be carrying quite the load. Not so romantic.

And then there is the fussing with shell. You’ll need some sort of pick and a cracker. I also suggest a dish towel to protect your hands while cracking. If you have picked crabs before, it is similar, but with a little more water because there is a lot more room inside the shell of a lobster.

THREE. The claws and the tail have the most meat. You can expect to get about 3/4 cup of meat out of a 1 1/2 pound live lobster.

If any of these things aren’t appealing to you, then just buy a lobster tail and be done with it. A little less presentation, but also less work. If you are in it for fun, read on!

This is the nice way of saying you are going to have to kill the lobster and if you don’t have the will to do this, I won’t judge you, but it needs to happen.

There is a lot of discussion on how to humanely kill a lobster and when it comes down to it, there are 3 ways that are considered to be acceptable, some more than others.

First, let it be known that experts believe that lobsters do not feel pain, although they do sense changes in temperature. Their nervous system is purely skeletal and resembles that of an insect. They also have no brains. You can be scared or feel pain without a place to process it.

They also do not have vocal chords, so the myth that they will scream when put in the pot is also false. There might be noise, but it is just spitting of the cold lobster going into a hot pot.

Whatever you do, keep your lobster cold in the fridge until you are ready to do it. This slows down their reflexes and keeps them calm. When making a steamed lobster or whole lobster options 1 and 2 are your best bets.

Boil. The thought of boiling something alive seems alarming, but many chefs will tell you that head first into the hot water (or steam pot) is actually the best way to go for you and the lobster. However, many folks think this is outdated and inhumane.

Knife Behind the Eyes– If you look at the back of a lobster, you’ll see a little cross in the shell. Aim there with a chef’s knife and stab in the middle. This disconnects the nervous system immediately. Some will say it is stabbing them in the brain, but they don’t have a brain so that isn’t possible.

Their legs may move around a little, this is purely reflex. They are now dead.

Cut off the Tail- Others just use a clever and cut off the tail. Other legs might move as a reflex, this is normal.

How to Cook Lobster

How long you will cook the lobster depends on how large the lobster is and what technique you are using. Here we are steaming lobster which takes a little longer than other methods, but is the most gentle and will yields sweet, delicate meat.

First, you’ll need a large, high pot about 4-5 gallons. A large stock pot or even a turkey frying pot will work. Fill the bottom with about 2-3 inches of water or other liquid options and salt. If you were on the ocean or in Maine, they would probably use sea water.

I like to use alcohol, whether it be beer, wine or sparkling wine. It can result in sweeter meat and the alcohol will burning off while cooking. If you omit this, add more water to the pot.

Place a steam basket or steaming rack at the bottom. Bring water to a boil. If you are putting live lobsters into the pot, keep the bands on its claws to protect yourself. If you stab them first, you can remove the bands before cooking.

When steaming or boiling, add lobsters, head first into the pot and cover. Cook according to chart. As you can see it is about 10 minutes plus 2 minutes for every quarter pound.

If cooking multiple and one is more on top than the other, make sure to open halfway through cooking to rearrange them so they cook evenly. This accounts individual lobster size, not total lobster size. Try to get lobsters that are similar in weight.

How to Eat Lobster

OK, so now you’ve cooked your live lobster and have this glorious beauty sitting on a plate. What’s next?

Before you get started eating your lobster, know that there will be water and there will be mess. Have some paper towels ready and be in a work space that can stand to get a little dirty, like a large cutting board.

ONE. Twist off large claws, set aside.

TWO. Twist off the tail. It should remove easily with just a little wrist action- no special tools needed. You now have 4 large pieces- the body, tail and two claws.

THREE. I like to start with the tail because this is the largest piece of whole meat. Place the tail with bottom side down, smooth, pretty side up. Using both hands, squish the bottom, thinner shell together.

It will collapse easily and the top of the shell should easily remove from the meat leaving you will a whole piece of tail meat. If you notice a lot of black- that is the intestine and can be removed.

FOUR. Next, the claws, because they also carry a good amount of meat. Wiggle smaller hinged portion of each claw to separate. It usually comes out with a tendon and sometimes meat.

FIVE. Now, the legs. The least amount of meat is in the legs and some folks don’t even bother, but real lobster lovers leave no meat behind. The larger legs that were attached to the claws have the most bang for your buck, so start there.

SIX. Lastly, the body. Many will toss the body aside and I don’t blame you. Sometimes you’ll hit the jackpot and other times you’ll get nothing. The body is also great to keep if you plan to make a seafood stock.

This is kind of like picking blue crabs, avoid the feathery looking pieces on the side, these are the lungs and inedible. Looks between the little cartilage lined pieces on the side and you might find pockets of meat.

While lobster meat is sweet and tender on its own, many people like to dip it in butter.

What is the green stuff in a lobster? It is the digestive organs and collectively known as tomalley. In crabs it is the yellow stuff called “mustard”.

It is edible, but experts suggest limiting your intake since it can be higher in mercury or cause an illness called paralytic shellfish poisoning (PSP) if the lobster has eaten other bottom feeders during red tide. The occurrence is low, but it happens. Do you like to live on the wild side??

Tomalley can be eaten straight. It is creamy and tastes like lobster meat just with a different texture. It is also used to add lobster flavor in sauces and butter. Lobster butter is made with simmered shells and tomalley. You can also whip it into a compound butter and use it to baste breads or other butter worthy objects and steaks.

What to Serve with Lobster

Sometimes it is called a lobster bake and some of the most popular items are steamed shrimp, boiled corn, roasted potatoes and coleslaw!

But of course, you can really serve it with anything you’d like. 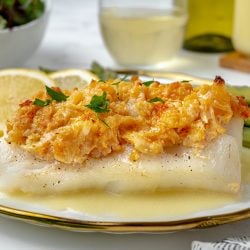 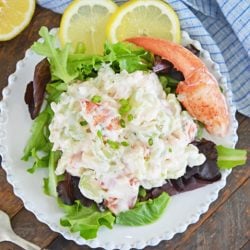 Cold Lobster Salad
4.68 from 28 votes
Lobster Salad is perfect for a light lunch or dinner! Serve on top of greens or even in a roll, which is known as a Cold Lobster Roll or New England Roll.
View this recipe 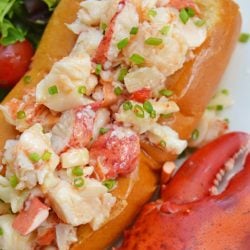 Hot Lobster Roll
4.88 from 8 votes
Perfect for a light lunch or dinner and served on a split top bun, the BEST Hot Lobster Rolls are a regional dish popular dish from Connecticut!
View this recipe 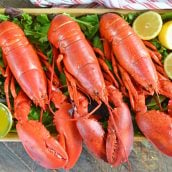 Using alcohol, whether it be beer, wine or sparkling wine is totally optional. It can result in sweeter meat and the alcohol will burning off while cooking. If you omit this, add more water to the pot.