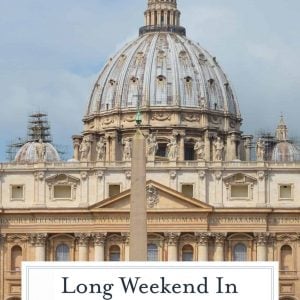 What to do in Rome

You’ve now been in this romantic city for one night and by now, I’m sure you are in love with Roma. The second day continues with a visit to Vatican City, which is technically considered another country, so check that one off your list!

No, you do not need a passport to visit Vatican City, however you do want to make sure you are wearing pants or a dress that cover your knees and something to cover your shoulders if you plan to enter any of the holy buildings.

The construction of the square was carried out between 1656 and 1667 at the hand of Bernini, with the support of Pope Alexander XII.

In the centre of the square the obelisk and the two fountains, one of Berni ni (1675) and another of Maderno (1614) stand out. The obelisk, which is 25 meters in height, was carried to Rome from Egypt in 1586. Can you imagine? Carrying this giant obelisk!?

Basilica: Opening time is at 7:00 a.m. including Sundays. The square and Basilica were designed by many through years. The dome is the work of Michelangelo, although it was not completed before his death in 1564.

Maderno designed the facade in the early 1600s and Bernini designed the square in the late 1600s to embrace visitors in “the maternal arms of Mother Church”, which is why it is circular.

St. Peter’s Basilica is one of the holiest temples for Christendom and one of the largest churches in the world. Besides, it is where the Pope presides many liturgies all year round.

It is quite surreal to visit knowing the amount of history that has taken place in this exact spot. The muse for many a movies, book and dramas, the air is oddly calming.

The construction of the new basilica began in 1506, when the old basilica had been torn down, and was finished in 1626. It was consecrated on 18 November, 1626.

The basilica was called St Peter’s after one of Jesus’s twelve disciples known as Saint Peter, who became one of the founders of the Catholic Church and was executed in Rome and buried where the Basilica now stands.

Inside, visitors will view St. Peter’s Baldachin, a large bronze baldachin designed by Bernini, The Pietà, a sculpture by Michelangelo and the statue of St Peter on his throne. St Peter has his right foot worn down due to the touches of the devoted believing it will bring them luck.

One of the most impressive parts of the Basilica is its dome designed by Michelangelo and continued by Giacomo Della Porta. Carlo Maderno finished the dome in 1614. You can even climb to the top of the dome for a mesmerizing view of Vatican City and Rome.

Vatican Museums & Sistine Chapel: The origins of the Vatican museums go back to 1503, the year in which the recently named Pope Julius II donated his private collection.

Since that moment private families and other popes have enlarged the collection of the museums to the point where it has become one of the largest in the world. Exploring the museums could take days, so knowing what you want to see is a must.

The Vatican Museums receive 6+ million visitors annually and are the only entrance to the Sistine Chapel. Some of the most popular museums are:

While St. Peter’s Basilica is open on Sundays, the Vatican Museums and Sistine Chapel are not.

Sistine Chapel: The Sistine Chapel is one of the greatest treasures of the Vatican City and can only be entered through the Vatican Museums. It is known as much for its ceiling as for being the room in which popes are chosen and crowned.

The construction of the building was carried out between 1473 and 1481 during the mandate of Pope Sixtus IV, to whom it owes its current name.

The Sistine Chapel is known for the frescoes that completely cover the walls and the ceiling. Some of the most important artists who worked in the chapel are Botticelli, Perugino, Luca and Michelangelo.

All of the frescoes of the ceiling of the Sistine Chapel are the work of Michelangelo, who spent four years painting the vault between 1508 and 1512. You’ll enter the room and join the crowds of people all staring… UP. Seeing it in person is surreal. Photos are not allowed, hence no photo here!

Continue your walking tour of Italy on your third and final day exploring the Roman Forum, Palatine Hill and the Colosseum.