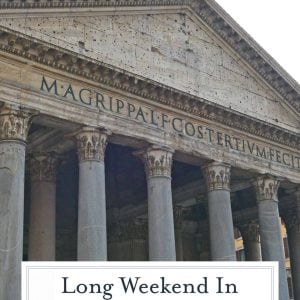 Exploring Rome can take years. Even those who live there barely scratch the surface. However, you can manage to see the main attractions in a long weekend.

We arrived on an overnight flight from the states and got to our hotel just after lunch. We were able to check in  early and start our sightseeing immediately. Day 1 of this itinerary a can be combined with Day #3, if needed, but as they are now, they allow you plenty of time to wander, grab an espresso and do some shopping without feeling at all rushed.

While Rome is huge, the city center were the sights are located are quite condensed and easy to walk.

Piazza del Popolo: The Piazza del Popolo was the arrival point of arrival for travellers for many centuries, the first view of the Eternal City, so it makes sense that it was grand and elegant. You can admire the piazza from the ground or from the terrace of the Pincio.

One side is framed by twin churches with twin streets leading out to mysteries of the city, while another side leads towards the imposing Porta del Popolo, a giant looming entryway.

The grandeur and current day energy of Piazza del Popolo make it easy to forget its dark past. It was the site of public executions and legend has it that the church of Santa Maria del Popolo was built to chase away the ghost of Nero, who used to haunt a walnut tree in the form of black crows.

People watching at the Piazza del Popolo is unmatched, you can spend an entire day here just relaxing and sipping espresso. Lucky for us, it was just a few feet from our hotel, so we spent a lot of time here and traveled through on our treks to every other part of the city.

Spanish Steps:  Designed in the early 1700’s, but not built until 1723-1725, the Spanish Steps are the widest stairway in Europe. It was built in order to link the the Trinità dei Monti church that was under the patronage of the king of France, with the Spanish square below.

The long, triangular Spanish square is named after the Spanish Embassy. In the 17th century, the area around the embassy was even considered Spanish territory.

The idea of connecting the church with the square below originates from the 17th century, when the French also planned a statue of King Louis XIV of France at the top of the staircase.

This plan was never executed, due to the refusal of the Pope. Look for chips in the stairs when a man tried to drive a Celica down them. It is the most damage they have ever seen. It is also well known for being a famous meeting place for artists and tourists.

Trevi Fountain: This is one of the most famous fountains in the world. Most people come here, not for the architecture or to take selfies, but to throw coins in the fountain.

This legend claims that you should throw three coins into the fountain: one for your return to Rome, the second for romance, and the third for marriage. It must be done with your right hand over your left shoulder. Take that with a grain of salt. Wink, wink. The coins are collected daily and donated to charity.

Many men were injured and few died during the construction of the fountain. In 1734, a stone-cutter was crushed by a large block of travertine. In 1736, a mason fell from the roof and died. In 1740, an apprentice slipped on the Travertine and passed away after many head lesions.

Needless to say, there are just as many ghost stories associated with this fountain, so you will see people visiting it late into the night to try and catch a glimpse of the supernatural.

Pantheon: The “temple of every God” was originally a Roman temple, not a church. It was only claimed as a church to save it from destruction.

Until the 20th century, the Pantheon was the largest concrete structure in the world. Michelangelo studied its great dome before starting work on the dome of St. Peter’s Basilica.

Dating from 125 AD, this is the most complete ancient building in Rome and one of the city’s most spectacular sights. Modern day shops and restaurants have surrounded around the giant monument.

Before the Pantheon we see today there were two previous buildings on the site, but both unfortunately succumbed to fire. The original building was erected between 25-27 BC, the time of Augustus, first Roman Emperor.

However in 80 AD, there was a huge fire. It is thought that the façade may be the only thing left from the Augustan Pantheon. The Pantheon was rebuilt by the Emperor Domitian but it was then burnt again in 110 AD, when hit by the lightning.

The third Pantheon (and current) is believed to have been built during Hadrian’s time between 118-125 AD. Grab an aperol spritz, gaze on the structure and let the history play it before your eyes.

The Pantheon is also the burial place of several important Italians (including the artist Raphael), and it remains an active church (since 609).

You can also get married at the Pantheon!

Piazza Navona:  Bustling public square where you can gaze at the Church of Sant’Agnese in Agone by Borromini, the famous Fountain of the Four Rivers and the Obelisk of Domitian by Bernini.

Piazza Navona is probably the most famous of Rome’s many piazzas. There are three fountains, lots of space, artists, locals and more. large and lively square features three magnificent fountains.

The square is built on the former Stadium of Domitian, built by Emperor Domitian in 86 AD. Hence the long, oval shape of the square. The stadium known as ‘Circus Agonalis’, which had a larger arena than the Colosseum, was used for festivals and sporting events.

Remnants of Domitian’s stadium are still visible around the area. Guided tours to this underground monument are available.

It is believed that over time the name changed to ‘in agone’ to ‘navone’ and eventually to ‘navona’.

The main attraction of Piazza Navona is the trio of fountains. The central, and largest, fountain is the Fontana dei Quattro Fiumi (Fountain of the Four Rivers). It was built between 1647 and 1651 on the request of Pope Innocent X. The fountain features four figures, each representing a river from a different continent – the Nile, Ganges, Danube and Rio de la Plata.

Although this seems like a lot, you will have plenty of time to wander, get lost, enjoy the streets, shopping and more.