This Potato Latkes recipe only requires 6 ingredients plus oil for frying. Learn the best way to fry for a golden brown color and how to get them to stick.

While traditional latkes are very simple in both ingredients and preparation, some home cooks tend to shy away merely because of the pan frying. Pan frying can be a bit tricky, but if you get to know your oils and also your range, you’ll be a pro in no time at all.

Of course we associate potato latkes with Hanukkah, but did you know latkes descend from Jewish-Italian pancakes that were made with ricotta cheese?

The first connection between Hanukkah and pancakes was made by a rabbi in Italy named Rabbi Kalonymus ben Kalonymus (c. 1286-1328). According to The Encyclopedia of Jewish Food by Gil Marks, the Rabbi included pancakes in a list of dishes to serve at an idealized Purim feast, as well as a poem about Hanukkah.

After the Spanish expelled the Jews from Sicily in 1492, the exiles introduced their ricotta cheese pancakes, which were called cassola in Rome, to the Jews of northern Italy.

Consequently, cheese pancakes, because they combined the two traditional types of foods–fried and dairy–became a natural Hanukkah dish.

Frying potato latkes is also something deeply rooted in the Jewish faith. The use of oil for Hanukkah is very important. Oil is used to represent the oil that miraculously burned for 8 days straight when it was used to light the menorah of the Holy Temple.

How to Fry Potato Latkes

No one wants overdone latkes, burnt oil or crispy hash brown shreds. If you are new to pan frying, keeping your oil from burning can be a learning curve. Here is my advice:

Remember, you want your latkes to turn out a nice golden brown. If you see that they are quickly turning a darker brown, turn down the heat.

Although frying latkes is the traditional and quicker route, oven-baked latkes are a simpler and healthier route.

Of course if you are making these for Hanukkah, the downside is that you are missing the symbolic element of oil and frying.

And the next most common question: what is the difference between potato pancakes and potato latkes? The answer is that they are very similar and use the same ingredients, the difference comes in small elements of preparation.

Potato pancakes– The potato is commonly finely grated, resulting in more of a pulp than thick shreds. This makes them easier to form into uniform circle shapes. Potato pancakes are often thinner and the texture resembles a coarse mashed potato pancakes.

Potato Latkes– Here the potatoes are shredded so they have a noticeable toothiness and texture when you eat them. They are dropped into the oil in haphazard shapes with crunchy strands hanging out the sides. They are typically a bit thicker and perfect in their imperfection.

Which Potato is Best

Russet potatoes are traditionally used because of the high starch content. This makes this sturdy enough for both shredding and frying. Yukon gold are a close second. Red potatoes can be used in extreme circumstances, but are a middle-of-the-road potato and might not get as crispy.

Whatever you do, avoid using waxy or soft potatoes like fingerlings, yellow or creamers.

In my opinion, there is nothing better than serving up some hot and fresh latkes with a dollop of applesauce. Sweet, cool and tangy, it is the perfect (and most traditional) pairing. But some people love to top theirs with sour cream. If you go this route, freshly snipped chives are a great addition for color and crunch.

If you aren’t a fan of the sweetness, here are some other options you could try:

Traditional latkes are great, but sometimes it’s fun to step outside the box and get creative! Below are some fun variations you can try too.

Baked Potatoes in the Oven 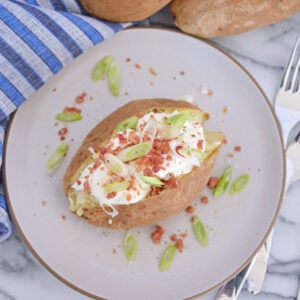 The perfect baked potato in the oven has a crispy skin with fluffy inside. Top with butter, sour cream and chives!
Crab Smashed Potatoes 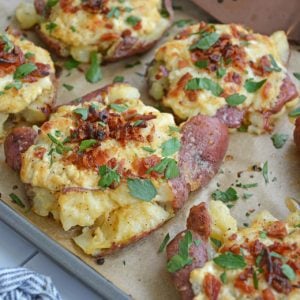 Crispy smashed potatoes slathered in butter, topped with creamy crab, given another butter bath before being topped with bacon and baked.
Hasselback Baked Potatoes 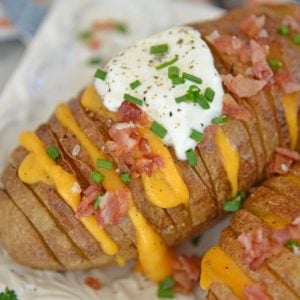 Calling all potato lovers! These crispy Hasselback Baked Potatoes are going to be your new favorite easy side dish! 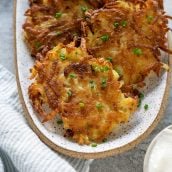 *soaking the potatoes is an optional step. It prevents them from turning brown and removes some starch, but honestly after you fry them up, no one will not if they oxidized a little. 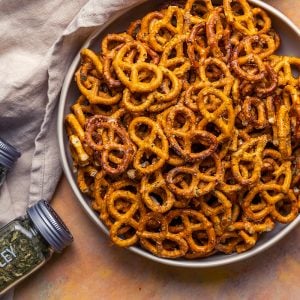 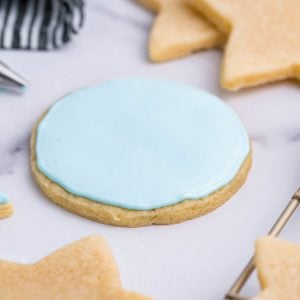 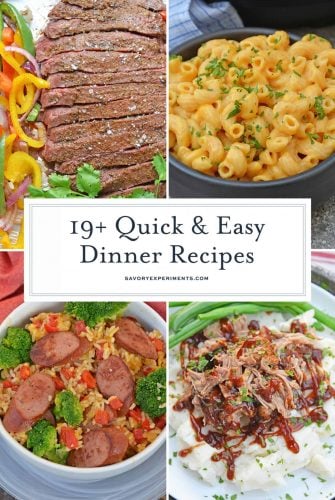 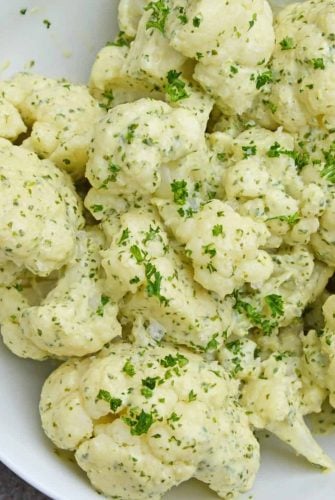 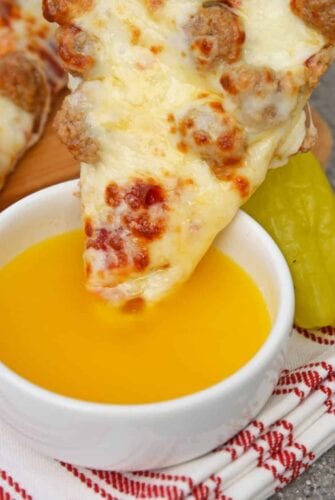