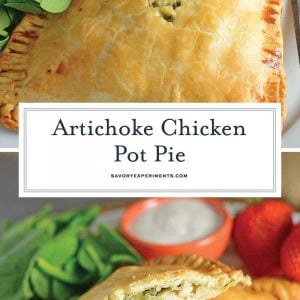 Instead, these bad boys use a flaky, pre-made pie crust filled with shredded chicken, artichokes, red onion, cheese and spinach all seasoned with Italian dressing.

I actually don’t care that much for the creamy base of a traditional pot pie, but I love the buttery crust. Most seem to be made with a “cream of something” soup that just doesn’t entice me much.

Even in dishes that call for it, like my Fancy Tuna Noodle Casserole, I make my own cream based sauce instead of using the canned cream stuff.

For the shredded shredded chicken there are a couple of choices. Frozen strips, thawed and then shredded work well. A store bought rotisserie chicken does the trick too.

Leftover chicken, grilled or lightly seasoned is perfect. On this occasion I had none of the above, so I baked a large chicken breast in the oven and then shredded it.

PRO TIP: Use a low moisture cheese to reduce the potential for liquid releasing making your crust soggy.

I generally keep shredded chicken in the freezer for occassions just like this. The goal here is simplicity and ease, but also super tasty. I don’t like wasting calories on crappy food.

Artichoke Chicken Pot Pie also freezes well. You can make them and freeze uncooked or cook and freeze individually.

I also like to dip mine in sauce. Creamy Italian Dressing is ideal, but Alfredo also works well. Serve with a nice Kale Salad for a full meal.

Questions you might have about how to make Artichoke Chicken Pot Pies:

Are these pot pies or hand pies? Well, technically they are probably hand pies, but the definition of pot is a type of meat pie with a top pie crust, sometimes a bottom pie crust, consisting of flaky pastry. (Wikipedia), and this dish meets those criteria.

Can I freeze these individual pot pies? Artichoke Chicken Pot Pie also freezes well. You can make them and freeze uncooked or cook and freeze individually.

Why are my pot pies soggy? Two things may have gone wrong. The first is not draining the artichokes well enough. You need to drain and even go a step further by rolling them on paper towels. Any leftover liquid can be released and make your pie crust soggy.

The other reason is steam. If you don’t poke adequate holes in the top of the crust, steam can’t release resulting in a sorry crust. 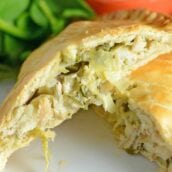