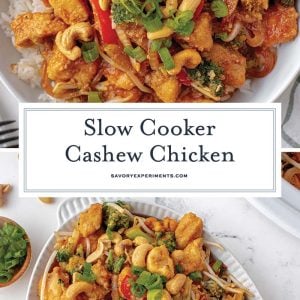 We are at an impasse at my house. I love the crunch of nuts in savory dishes, while hubby loves nuts, but hates them in any “hot meat”. I’ve created this easy Slow Cooker Cashew Chicken Recipe that makes the chicken fork tender, keeps the veggies snappy but also adds the nuts right at the end to please us all.

Chunks of browned chicken tossed in a savory sauce and mixed with bell pepper, onions, broccoli and bean sprouts, it is a one dish meal that covers all the bases. Serve it over 90-second rice and and you are good-to-go.

A crock pot is great. It saves time, creates tender meats and flavorful meals. The only issue I take with slow cooker meals is that sauces tend to be watery and sometimes need to be over seasoned to make up for lack of evaporation during the cooking process.

When I made this Cashew Chicken Recipe, I had to throw a few of my rules and beliefs about slow cookers out the window. I also made this recipe as part of my 30-day recipe challenge with a few blogger friends, make sure to scroll all the way down to see what creations they shared!

First, I generally have a “10 minute” rule. Meaning that if it takes more than 10 minutes to load everything into the pot, then it defeats the purpose. Cashew Chicken gives you the option to brown your chicken before setting in the slow cooker or just throwing in without the breading saving time (and calories), but losing a small amount of flavor development.

Secondly, that sauces need to be doctored before serving. Instead of the objective of the slow cooker to be ease, I used it as a tool to braise, essentially.

I know, I know- you are looking at this recipe list and it’s lengthy, but a lot of it are things you likely have in your pantry with the exception of maybe Chinese Five Spice Powder, but don’t worry, I’ve got a swap for that!

Variations include adding mini corn ears, water chestnuts, snap peas, carrots, zucchini cubes, straw mushrooms, a splash of oyster sauce, fish sauce or even a drizzle of sesame oil at the end. Some like toasted sesame seeds, but that reminds me too much of sesame chicken.

How to Make Cashew Chicken in the Slow Cooker

Life is full of choices and here is a tough one. Take the time to bread and brown the chicken before placing it in the crock pot or throwing it all in too cook. Both have pros and cons.

For my homemade cashew chicken, I prefer to flour and brown it because it brings depth and flavor to the chicken and the sauce and only takes about 10 additional minutes, most of which I can use to whisk together the sauce and chop the veggies. There are instructions on how to make it by skipping this step in the recipe card notes.

Save time on the day you serve Slow Cooker Cashew Chicken, by preparing the chicken and sauce the night before, placing them in separate containers in the refrigerator and popping into the slow cooker 3 hours before I was ready to serve.

Cashew chicken can also be easily frozen after being cooked. Place it in airtight containers for up to 6 months.

Kung Pao Chicken
4.89 from 9 votes
This easy Kung Pao Chicken recipe is better than takeout and is on the table in 30 minutes, which makes it a perfect weeknight meal!
View this recipe 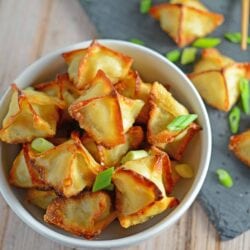 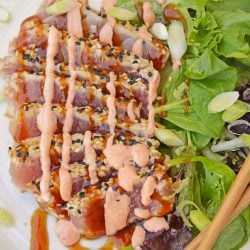 Teriyaki Tuna Recipe
4.54 from 76 votes
This Teriyaki Tuna recipe brings a delicious meal to the table in just over 20 minutes! This ahi tuna recipe is a quick and easy meal!
View this recipe 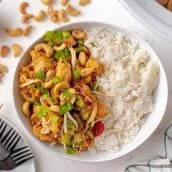 You can use raw, cubed chicken breast without breading, add to slow cooker with sauce and cook on low for 4-5 hours. Whisk together 2 tablespoons cornstarch with 2 tablespoons water and stir in before serving to thicken sauce.  You can use up to 4 chicken breasts OR 8 boneless chicken thighs with the same amount of sauce and vegetables. The cooking time may increase due to the increase in volume, please check chicken doneness before serving.

Check out all the other lovely chicken recipes below from bloggers who took part in our 30 Day Chicken Challenge.