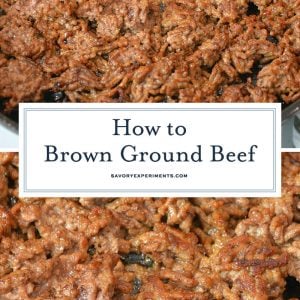 You are going to like this… but I can with about 75% certainty tell you that even though you think you are browning your ground beef you aren’t doing it correctly.

I know! Big statement to make! But the hard, honest truth is that people cook their ground beef, but they don’t actually brown it. The difference in a recipe can be staggering and a fine line between “eh, t’s dinner” and “holy cow, this is the best ground beef recipe ever!”

Even more truth- most ground beef recipes that tell you to brown it, also don’t actually give the correct instructions. So throw everything you knew about hamburger meat out the door and let’s learn how to brown ground beef the right way for crisp lacy edges and a juicy bite.

Yes, I understand that browning is essentially cooking, but it is SO much more.

Why is Browning Important

In another post, we went into length about the chemical reaction known as the maillard reaction, otherwise known as browning. This changes the food on a molecular level by creating acidic, and with it, oodles of flavor. It also helps things like meat stay nice and tender. Wikipedia defines it as “chemical reaction between amino acids and reducing sugars that gives browned food its distinctive flavor.”

But the maillard reaction can happen with nearly any food, not just meat. Think about browning a marshmallow or vegetables, the char you get from a grill, all of these count!

Many folks will refer to this hamburger meat, but ground beef is excellent for many recipes well beyond hamburgers. In order to brown well, you do need a little fat, so my pick when asked to brown is a 80/20 blend. Lean beef will require you to add a little oil to aid in developing that beautiful crust, and therefore flavor.

Ground beef flavor can also vary greatly depending on what cut it was ground from. A ground sirloin will have more flavor than a standard package, which is generally made up of a variety of cut discards. Regardless of the type of beef, browning will add flavor and tender texture as long as there is enough fat, which helps it get nice a hot.

If you use a lower fat content, or another type of meat such as turkey, chicken or lamb, consider adding a teaspoon or two of a neutral oil.

Cast iron is hands down the best choice for browning nearly any type of meat. You need a skillet that gets super hot and does so evenly. Stainless steel is a close second, but will likely require a tiny bit of oil to prevent sticking. Non-stick and aluminum are not recommended for browning.

The size of the pan is also crucial. How many times have we made something and said “don’t crowd the pan”- same goes for browning any meat. If it stuffed in there too close together, the moisture trapped in the food release- but hits the food next to hit, which prevents browning, but creates steaming. Now instead of an intensely browned and delicious chunk of meat, you are left with a kinda beige lump of chewiness.

First, browning meat properly can happen on the stove top and sometimes the grill, not really in a crock pot, instant or the oven.

Can you brown frozen ground beef?

If thawed and blotted so the surface area is dry, yes. However, it would be very difficult to brown still frozen meat of any kind because of the release of moisture and uneven cooking when the outside is cooked, but the inside still frozen.

When do I season?

Oh goodness, don’t get me started. Not at the beginning when most recipes tell you too, especially if it is salt. Salt draws out moisture, which creates steam and prevents browning. Adding other types of spices and herbs runs the risk of browning them in the pan during the searing process. I highly recommend adding them at the end, which your beef is nice and crispy.

But now it is dry and dry spice blends have a hard time distributing evenly. Feel free to add a small amount of moisture here since the browning has already happened. A tablespoon of wine, beef broth or water added to the large skillet will help to coat the crispy meat.

Can I brown beef ahead of time?

You sure can! The meat will retain some of the flavor achieved from browning, but will likely lose the crispiness in the fridge. Store in an airtight container. Instead of microwaving it, try heat a small amount of oil in a skillet and browning it a little more. You’ll need the oil since most of the fat was used in the first browning sessions.

Also, taste for seasoning. Salt and other spices tend to become muted when chilled and require a little sprucing while reheating.

Can I freeze crumbled cooked beef?

You sure can! Freeze it in an airtight freezer bag for up to 4 months. Try to pus out as much air as possible from each bag and store them towards the back of the freezer. After thawing, revive using the reheating instructions above.

Can I skip browning in a recipe?

You can do whatever you want, but the recipe won’t have the intended flavor if this step was skipped. Also, if you end up not getting the perfect brown- all is not lost.

What if I messed it up?

It happens from time to time- different packages have more or less moisture and then just go awry. But all is not lost. Browning creates acid, so add a little acid into the recipe. Common pairings for beef recipe include Worcestershire sauce, soy sauce, wine, vinegars or more garlic and onion.

Can I use this technique for other meats?

Yes! The concept is the same regardless if you are making another ground meat recipes or using cubed chicken or beef, steaks and meatballs. Anything, really!

Can I add other things while browning?

You can, as long as those other things don’t contain moisture. Avoid trying to saute onions or garlic while you are browning meats. Do it in stages and then add them together at the end.

Mine has a lot of liquid or fat, what do I do?

If there is too much liquid in the pan, your chances of browning are gone. Instead, pour all of the meat into a colander and drain it. Transfer it back to the hot skillet and go from there. Do this as many times as you need to make sure it isn’t pooling.

Some lower quality meats will have this issue, but it doesn’t mean they won’t be flavorful in the long run. It just adds a few more steps and roadblocks.

Can you brown ground beef in a crock pot?

The short answer is no, don’t shoot the messenger! Slow cookers, even on the high setting, never get hot enough to produce the chemical reaction. The high sides also trap excess moisture. It doesn’t mean your recipe will be terrible if you cook the ground meat in a slow cooker or instant pot, for that matter, it just isn’t truly browned.

Can you brown ground beef in the oven?

Yes and no- if you have cooked ground beef, you can fake the browning process by putting it under the broiler and letting it char a little. It isn’t quite the same, but close.

What should the internal temperature of ground beef be?

According to the CDC, ground beef should be an internal temperature of 160°F. Any ground meat has more surface space and thus presents a higher risk for the yuckies. Handle carefully, wash your hands and cook fully. I am a lover of rare beef, but this is not the time to put that into play!

Recipes the Use Ground Beef

Now you need to practice your new skill. Here are a few recipes that go beyond sloppy Joes and taco meat. 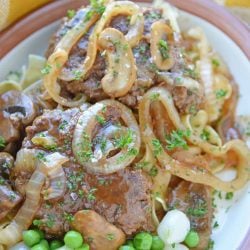 Salisbury Steak
5 from 7 votes
Forget what you know about salisbury steak, this Homemade Salisbury Steak recipe is out of this world! Topped with a mushroom gravy, it's moist and delicious!
View this recipe 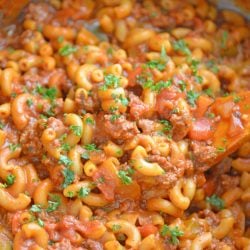 Beef Goulash
5 from 5 votes
Classic goulash doesn't get any better than this Beef Goulash recipe! The perfect comforting meal for any weeknight!
View this recipe 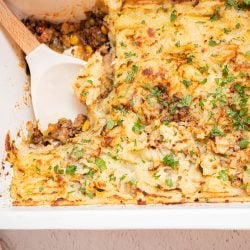 Shepherd’s Pie
5 from 6 votes
The BEST Shepherd’s Pie is made with frozen vegetables like peas, corn, carrots, and green beans and is perfect for an easy dinner!
View this recipe 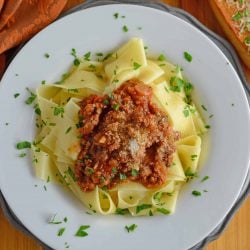 Bolognese Sauce
4.80 from 5 votes
Bolognese Sauce is a classic Italian sauce. Ground meat and coarsely chopped vegetables give this Bolognese recipe a rich and hearty taste that serves well over pasta and in lasagna.
View this recipe 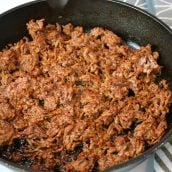